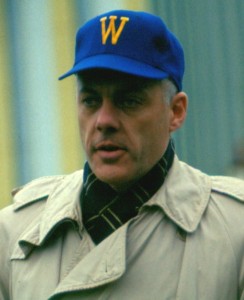 Former Winnipeg Blue Bombers head coach Bud Grant will be honoured with a bronze statue modelled after this photograph. (HANDOUT)

The Winnipeg Blue Bombers are honouring a former head coach of the team with his own statue this fall.

Bud Grant coached the Bombers from 1957-1966 and will be remembered in the form of a bronze statue outside Investors Group Field in October.

“The statue of Bud Grant not only honours a man who made a tremendous impact on our football club during his time here, but it also symbolizes the many dedicated, talented men who have coached and played for this team over the years,” said Blue Bombers president and CEO Wade Miller.

Grant won four Grey Cups in his time with the Blue and Gold, including winning an award for CFL Coach of the Year. He later went on to coach the NFL’s Minnesota Vikings.

“I certainly am unexpectedly honoured by something like this. After so many years, it’s quite a tribute, and I look forward to being there,” Grant said in a release.

The six-foot tall, bronze statue will have an inscription detailing Grant’s accomplishments in football and be located outside the Bomber Store just off Ken Ploen Way.

An unveiling ceremony will be held on Saturday, October 25. Grant will attend the annual Blue Bombers Legacy Dinner on October 22.