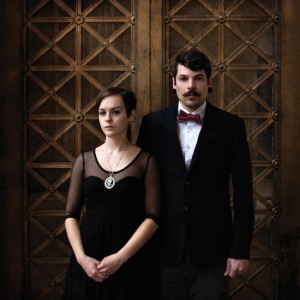 The Lawrence County, TN couple came from different musical backgrounds — Tony White was into rock and punk, while bluegrass and gospel were more up Grace Shultz’s alley – but when the two connected, sparks flew and the self-described genre of “punkgrass” was born.

White admits to developing a crush on Shultz while watching her perform on stage in their hometown of Loretto and asked her to jam in 2010. Shultz handled banjo and mandolin duties, White played guitar and they both sang vocals and harmonized on an infectious mixture of folk, Americana, bluegrass, Texas swing and punk.

They released the EP, Inside a 7-Track Mind, in 2011 and regularly made the two-hour drive north to hit the streets of Nashville where they cut their live chops busking, winning over passersby with dark and haunting tales of murder, broken hearts and addiction.
Songs about being in love would come later.

The many musical sides of the talented duo can be heard on the exceptional debut full-length album, November, released last year in the month it is named after, which came a few months after the pair got married and solidified their musical and emotional union. One listen to Grace & Tony and you will fall in love, too.

Listen to a sample of Grace & Tony music on the Winnipeg Folk Festival website.