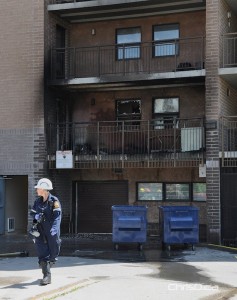 A heroic Winnipeg police officer is being credited with saving the life of an 81-year-old man from a burning apartment building on Thursday.

Officers on patrol in the 400 block of Sargent Avenue came across the fire at around 2 p.m. before it had been reported.

One of the officers ran into the second floor of the building, where he found two males who had tried unsuccessfully to pull a senior out. The two were pushed back by the smoke, but the officer went into the suite and was able to assist the disoriented senior out of the residence.

Both the senior and police officer were treated for minor injuries.

Damage is estimated at $150,000 and the cause remains under investigation.