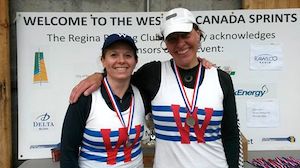 Members of the Winnipeg Rowing Club came away victorious at the 37th Western Canada Sprints Regatta in Regina this past weekend.

The competition drew 279 rowers from Winnipeg, Regina, Kenora, Saskatoon, Calgary and Edmonton. WRC sent a team of 34 athletes to compete in junior, open and master events.

“Our athletes did a tremendous job,” said WRC head coach Steven Taylor. “It was a very successful regatta, and a great kick-off to the 2014 rowing season.”