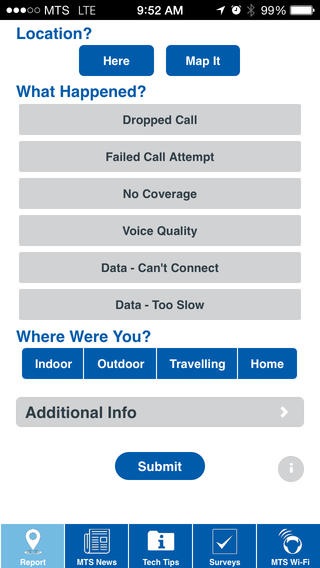 Have a problem with MTS wireless service? There’s an app for that.

The telecommunications company has launched the My Network Feedback app — a free tool to allow customers to report wireless network service concerns.

MTS says it’s continually evolving its 4G LTE network and the app is another way for customers to provide feedback to improve service.

The app can report voice or data connectivity issues to MTS, including dropped calls, coverage gaps, voice quality and slow data. For added accuracy, users can map their location and indicate whether they are indoors, outdoors or travelling. MTS will use this information to prioritize future network enhancements.

The app is a free download for Apple, Windows and Android phones, as well as select BlackBerry devices.