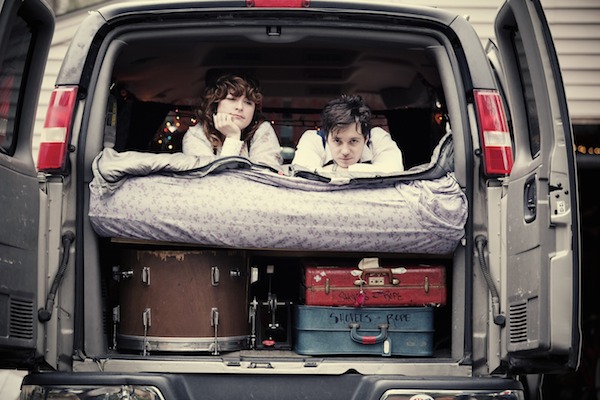 Michael Trent and Cary Ann Hearst were rambling solo artists when they met each other on tour in Athens, GA back in 2003. They formed a kinship, which eventually turned into a marriage, and recorded an album of murder ballads, aptly titled Shovels & Rope. The pair took those songs to barrooms across Charleston, SC, doing it just for fun and some extra cash, but buzz for their raucous shows grew and they started to be booked as a duo more often than their individual solo shows. They decided to listen to the people and strike out as a band, adopting the name Shovels & Rope, in 2010.

Hearst belts out a voice that’s a little country, a little soul and a little punk. Trent accompanies with a southern twang harmony. Two old guitars, a drum kit chunked together by pieces found at the junkyard, a wheezy harmonica and a bit of organ tie it all together to make one foot-stompin’ roots-Americana duo.

While touring with the likes of Hayes Carll, Justin Townes Earle and the Felice Brothers, they made their debut as an official duo: O’ Be Joyful. It was written, literally, on the road – organ in the van while flying down the highway and vocals in hotel bathrooms along the way. The musical result harkens back to the old time roots recordings, live off-the-floor and true. The record earned them the Emerging Artist of the Year title at the 2013 Americana Music Honors & Awards and their song “Birmingham” claimed the Song of the Year.