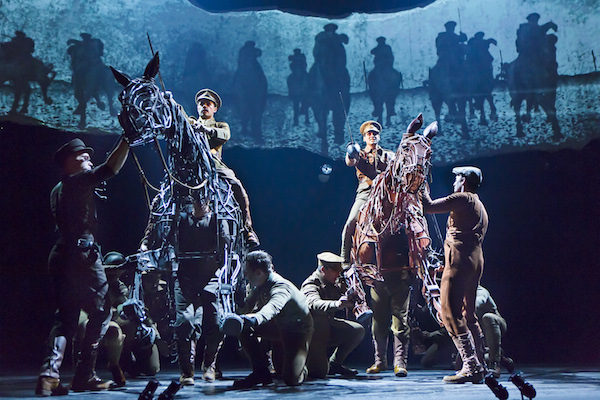 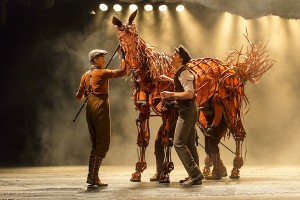 Based on the 1982 novel by Michael Morpurgo and adapted by Nick Stafford, War Horse is the early 20th century saga about a boy named Albert and his beloved horse Joey.

The production runs two hours and 40 minutes and is set in the United Kingdom at the cusp of WWI. It begins with a young foal being auctioned off to the highest bidder. The foal, a life-sized puppet created by the Handspring Puppet Company and operated by three puppeteers, becomes the object of a bidding war between two brothers; the wealthy and respected Arthur Narracott and his poor, drunkard brother Ted Narricott. Bidding his entire mortgage, Ted wins the auction, a momentary victory in his bitter brotherhood rivalry, and the wild foal to be named Joey.

Unhappy that her husband spent the mortgage money to pay for a horse, Rose Narracott instructs their teenaged son Albert to care for Joey until he is ready to be sold. Albert agrees, and instantly the boy and the horse form a strong bond that cannot be broken. Albert even manages the impossible, training the hunter horse to plow, which helps his father win a drunken bet against his brother, recouping the excessive amount that Ted initially paid for Joey. For his efforts, Albert wins father’s word that Joey is his horse, and will never be sold.

Albert’s win is short-lived, as Ted sells the horse to Lieutenant James Nicholls at the beginning of the war. Crushed, Albert lies about his age and enlists in the army so that he can travel to France in search of his horse.

While the set for War Horse is minimal, the acting and the life-sized puppets are what really bring this beautiful story to life. The incredible creations made by the Handspring Puppet Company, coupled with the talent of the puppeteers who play Joey, Topthorn, and the other horses do a magnificent job of leading audience members to truly believe in the horses in this play. Everything from the personality of each horse, to the most subtle mannerism, is played out perfectly in this production.

It is, in the truest sense, a magical experience to see these puppets come to life.

While nearly three hours long, War Horse is broken into two parts by a 15-minute intermission. The second half of the play is heavier, revolving around the war and the different journeys that Albert and Joey take in war-torn France. Both lives, intertwined by the same disparity and war, yet lost from one another, see their share of friendship and loss throughout their journey. Other stories and characters are woven into the production, but ultimately the boy and his war horse make up the heart and soul of this story.

War Horse is a must-see for avid theatre-goers and newbies alike. The puppeteering is spectacular and really worked in this play.

War Horse runs until June 22 at the Centennial Concert Hall. Tickets start at $35 and $40 for select performances and are available at Ticketmaster.