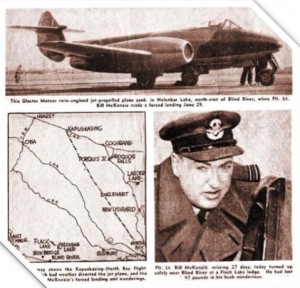 A new exhibit opening today at the Western Canada Aviation Museum tells the story of the country’s first jet pilot.

Winnipeg RCAF pilot Fl/Lt William McKenzie survived 26 days without food in June 1946 when his Gloster Meteor jet fighter ran out of fuel over Northern Ontario on a flight to North Bay.

McKenzie was forced to ditch the aircraft in the lake and spent nearly a month without survival gear, shelter or a way to call for help. Authorities called off the search eight days later, declaring him dead.

“Into the Jet Age” exhibit tells the story of his life and death struggle after the crash in the Canadian Shield and how he lived to tell the tale. It also includes a brief look at one of the world’s first jet fighters, the Gloster Meteor.