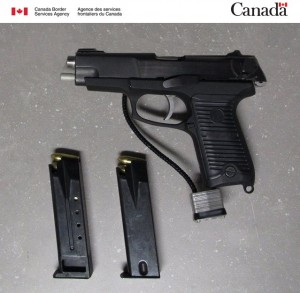 Border agents at the Lyleton, Manitoba port of entry seized a load 9mm handgun on June 21.

The gun and its two loaded magazines were concealed in a duffle bag on the backseat of the vehicle coming from the U.S. CBSA guards found the weapon while examining a truck and trailer attempting to cross into the country.

Tommy Earl Daves, 57, of Mertzon, Texas faces one charge under the Customs Act.

He was released on a promise to appear in Winnipeg court on August 11.

Officers have seized seven undeclared firearms in southern Manitoba so far this year.