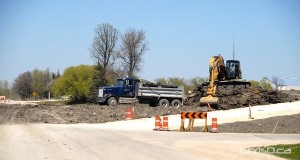 Seven Manitoba communities are in line for permanent flood protection upgrades at a cost of $14.85 million.

The province and federal government are funding the construction of permanent dikes by upgrading and replacing the temporary diking put in place following the floods of 2011. Communities include the towns of Souris and Melita, Duck Bay, Waterhen and the rural municipalities of St. Clements, East St. Paul and West St. Paul.

“A tremendous unified effort was required across Manitoba to fight the flood of 2011 and these communities responded to that challenge with temporary dikes to protect people and property,” said Minister of Infrastructure and Transportation. “We are pleased to join in the funding of the conversion to permanent dikes and enhanced flood fighting capacity.”

Ottawa and the province will both provide $6.75 million each, while the seven municipalities will contribute $1.35 million.