Home » News » Renderings Released of Future Development at The Forks

Renderings Released of Future Development at The Forks

An architectural rendering of the proposed development on Parcel 4 land at The Forks. (HANDOUT) 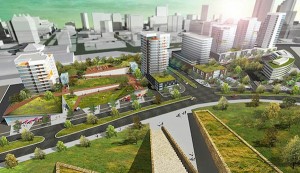 A bird’s-eye view of the future land development at The Forks. (HANDOUT)

WINNIPEG — The vacant piece of land at The Forks known as Parcel 4 now has visual representation of its future.

The Forks will present its revitalization plans to the City of Winnipeg on July 2 for the nearly 12 acres of land currently occupied by a surface parking lot adjacent to the Canadian Museum for Human Rights.

The two parties began talking last April for what to do with Parcel 4 and its nearby Rail Side land partner. Ideas for a water park and hotel were quickly scrapped and it was back to the drawing board from there.

“The lands around The Forks are incredibly important to Winnipeg,” said Point Douglas Councillor Mike Pagtakhan, chair of the Downtown Development, Heritage and Riverbank Management Committee. “Citizens and visitors feel a connection to this national destination where people have been meeting for thousands of years.” 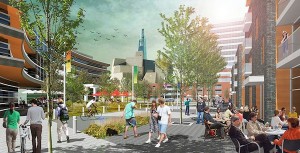 A central plaza with an emphasis on pedestrian-friendly pathways would be incorporated. (HANDOUT)

The plan includes a wide pedestrian tree-lined promenade to enhance the walk from along Waterfront Drive from The Forks to the Exchange District. Shops, cafes and public spaces will also be incorporated.

Public amenities account for 60% of the proposed plan, including new parks, plazas, promenades and visitor parking.

“A central plaza on Parcel Four will forge a stronger pedestrian link to Portage and Main,” said Jim August, CEO of The Forks North Portage. “And, the central public park on the Rail Side parcel will create a new space for recreation and viewing of the Canadian Museum for Human Rights.”

The public can submit their ideas and feedback online or at an open house later in July. 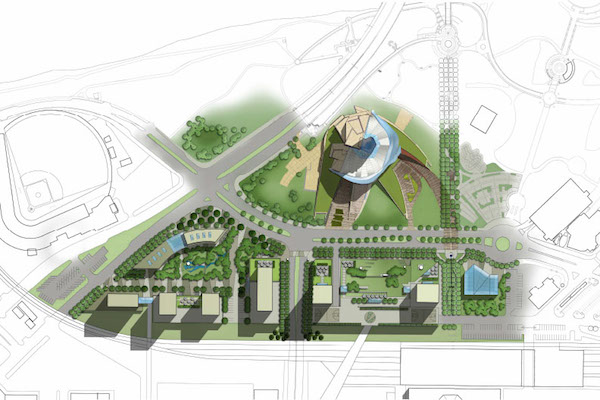 ← Previous: Steeves Would Serve Only Two Terms If Elected Next: Crew from 17 Wing Winnipeg Assists in Search for Downed Aircraft →
Tags: Construction | The Forks | Winnipeg