Bombers Blast Out of the Gate with 45-21 Win 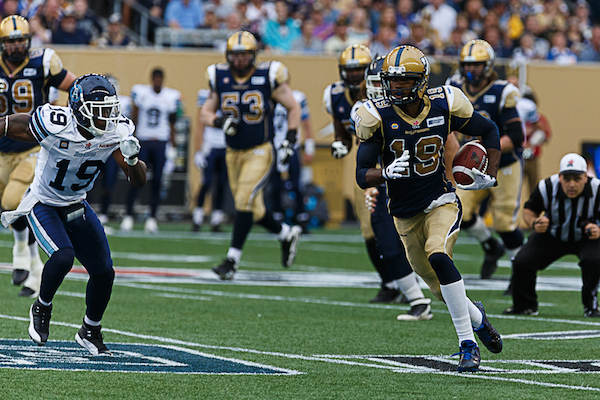 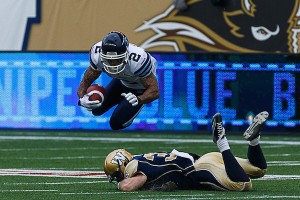 WINNIPEG — Fans of the Winnipeg Blue Bombers are going to wake up pretty happy Friday morning as the Blue and Gold kicked off their 2014 campaign in impressive fashion Thursday night.

Winnipeg took an early lead and never looked back, beating the Toronto Argonauts 45-21 in front of 24,872 fans at Investors Group Field. And despite the somewhat disappointing crowd, the football club opened some eyes and likely impressed onlookers from across the country in the CFL’s season-opening game.

“He ran the offence extremely well,” said Winnipeg head coach Mike O’Shea of his starting quarterback Drew Willy. “He made good decisions. Got rid of the ball on time. He’s a professional football quarterback. He just ran a good game.”

“Ultimately our goal was to get the win,” said Willy, who finished a rock-solid 19-of-27 for 308 yards with four touchdowns and one interception. “We did a good job with moving the ball. Offensive line protected well. Receivers made plays. (Nic) Grigsby ran the ball well and the defence played lights out.”

One of the receivers who made multiple plays for Willy and the Bombers offence was Aaron Kelly, who lead the team with five receptions for 100 yards and a pair of first quarter touchdown grabs to put Winnipeg up 14-0 early.

“I feel like I’ve got a good opportunity here. I worked hard to win the starting spot,” said Kelly, who was cut by Hamilton and joined the Bombers as a free agent midway through last season. “I just wanted to come out and start fast and help the team win.”

Rookie running back Nic Grigsby put together a solid stat-line, amassing 122 yards on 21 carries, and added 17 yards on two catches.

The Blue Bombers defence held the always-dangerous Ricky Ray to 283 yards passing and two touchdowns, with one being set up by a 77-yard kick return by Toronto’s Brendan Smith.

“We’re not surprised at all,” said first-year safety Moe Leggett, who was all over the field Thursday night breaking up passes with pure athleticism and intimidating opposing receivers with a sorely-missed physical presence in the Bombers defensive backfield. “Our offence is doing a good job helping us get better. And we’re just hustling to the ball. We’re sprinting to the ball and that’s what coach asked us to do.”

The Blue Bombers will look to improve on their 1-0 start the season when they host the expansion Ottawa Redblacks in their first CFL game on Thursday, July 3 at Investors Group Field.