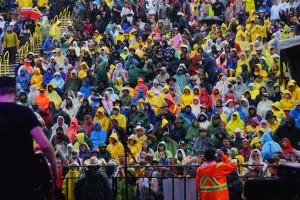 Concert-goers at Dauphin’s Countryfest wear ponchos and rain gear on Saturday during a show on the main stage. (TODD PEDERSON / HANDOUT)

Weather warnings remain in effect for much of southern Manitoba as wind and rain continue to pack a punch.

“These winds together with full tree foliage and saturated ground are leading to several reports of tree branches down along with local power outages. The winds are expected to stay strong through today into this evening before they start easing off overnight as the storm system weakens somewhat,” the statement read.

Trees were reported down all across the city, including on River Avenue, where a large tree snapped and landed on a vehicle. There were no reported injuries. Elsewhere, large branches were seen strewn across the road on Wilmot Place and also in Tuxedo.

West of Winnipeg, rainfall warnings blanketed much of the region, including in Brandon. City officials said the airport was closed on Sunday due to flooding on the runway. The same warning stretched to Delta Beach and northward to Dauphin, where the annual Dauphin’s Countryfest is wrapping up.

“Moderate to heavy rainfall will continue today on the backside of this system. An additional 30 to 50 mm of rain is expected over the next 24 hours with localized storm totals of 125 to 150 mm possible in areas close to the Manitoba-Saskatchewan border,” Environment Canada said.

Manitoba Hydro reported 1,400 customers were without power in the River East area. The same outage was said to be affecting roughly 1,300 customers in Fort Garry and 1,100 in the Eastwood area. Power was slowly being restored by 11 a.m. and will continue into the afternoon as crews make their rounds to the affected neighbourhoods.

Several Manitoba roads were reported to be water-covered or washed out on Sunday. For the latest list of affected areas, visit MB511.ca

Winnipeg’s James Richardson International Airport is reporting flight delays and cancellations. Officials ask travellers to check the status of their flight at WAA.ca by contacting their airline.