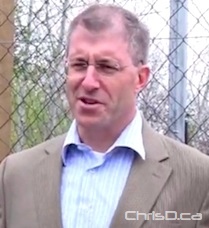 The former city councillor said the exception would be on projects receiving external funding, such as from other levels of government. Infrastructure spending not already included in the council budget would not move forward outside of that timeframe.

“Our citizens deserve a better and more efficient approach to managing city resources.  This plan will not require additional funding as it will reallocate existing resources and focus on the priorities of Winnipeggers,” Steeves said.

Steeves also promised $421,000 to fix potholes, taking 0.5 percent of the regional street budget for a two-week pothole-fixing “blitz,” and committed to have 75 percent of regional road construction projects done on evenings and weekends.

He would also create a working group with the provincial and federal governments to better manage infrastructure priorities.