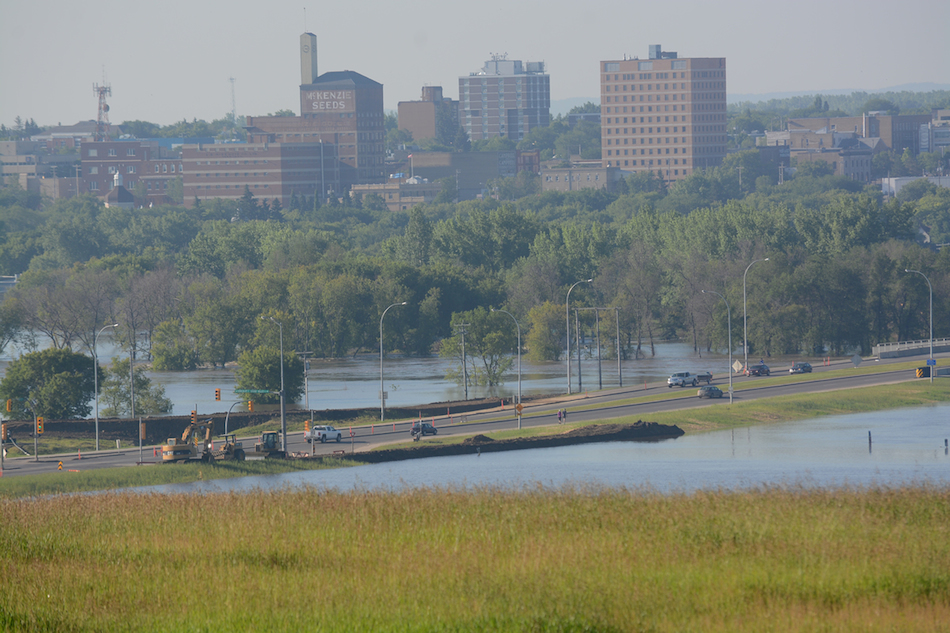 The dike at 18th street and Grand Valley Road in Brandon on Saturday, July 5, 2014. (EBRANDON.CA)

The Assiniboine River in Brandon is creeping up to the top of the city’s flood dikes, measuring 1,182.36 feet above sea level at 1st Street on Saturday by 5:30 p.m. The crest is expected to hit by midnight.

City officials are preparing for 2011 levels of 1182.89 feet or greater. River levels are up approximately two inches from 3 p.m.

Clay is being added to one low spot on the south dike to help shore it up and prevent a breach. Dike work has already been completed on Grand Valley Road, which is already closed to traffic.

“A reminder to everyone that at this time we have no intention of evacuating. No one has been evacuated from Brandon,” the city said in a release. “We have plans and people in place that can be activated at a moment’s notice.”

Brandon Mayor Shari Decter Hirst asked residents in the potential evacuated areas to think about where they might stay if evacuated, stating the Wheat City doesn’t have enough hotels for everyone.

“We would suggest a phone call to friends or relatives outside the evacuation zone to make arrangements to stay with them should you need to,” she said.

Meanwhile, east of Brandon near Portage la Prairie, officials are surveying the Hoop and Holler Bend to allow additional water to flow through a deliberate cut. The action is a repeat of 2011 in an effort to save community homes, while sacrificing land.

Premier Greg Selinger said Saturday that the cut will only be made as a last resort and sandbagging efforts by some 400 soldiers could be enough to maintain water levels.

Prime Minister Stephen Harper will visit Brandon on Sunday to tour the flood zone. Harper was also in the city during the major 2011 flood.