Brandon Deals with Storm, Fire on Top of Flooding 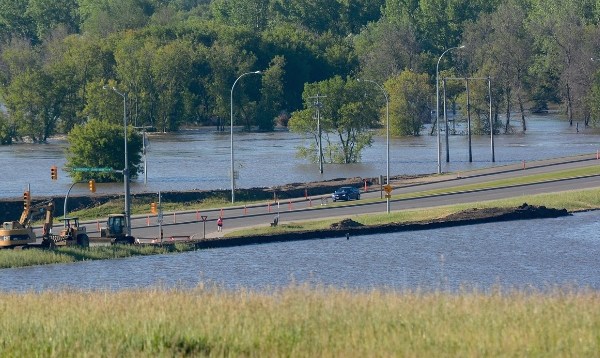 The 18th Street dike holding back the Assiniboine River in Brandon on Sunday, July 6, 2014. (EBRANDON.CA) 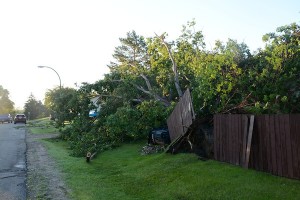 Brandon faced a wild night Saturday to add to the already heightened alert as the Assiniboine River created by Sunday afternoon.

A storm ravaged the city with a heavy dumping of rain and strong winds. Officials say the majority of damage was uprooted trees and downed power lines, adding the additional rain water did not impact the many dikes holding back the river throughout the city.

Most of the damage was concentrated between Park Avenue and Crocus Plains High School and between 1st Street and 18th Street.

Across the street from City Hall, a fire broke out at a Chinese food restaurant on 10th Street, sending smoke billowing over the downtown area. The blaze was unrelated to the flooding.

Back on the flood front, the Assiniboine River measured 1182.64 feet above sea level Sunday morning at 1st Street, which is up three inches since 9 p.m. last night. Readings will be taken every three hours. Water is now two feet below the dike, and the crest has now hit. A second crest is expected July 17-18.

No evacuations have been ordered, but residents in vulnerable areas remain on standby.

Some water is coming through cracks in the asphalt at the intersection of 18th Street North and Kirkcaldy Drive due to ground saturation relating to the high river levels. The city says the same thing happened in 2011, and pumps are on standby if required.

Brandon police charged several people people with swimming in Dinsdale Park, issuing them $113 fines for trespassing. One person was charged with trespassing for swimming at 1st Street North.

Prime Minister Stephen Harper met with officials to get a firsthand look at the situation on Sunday afternoon.