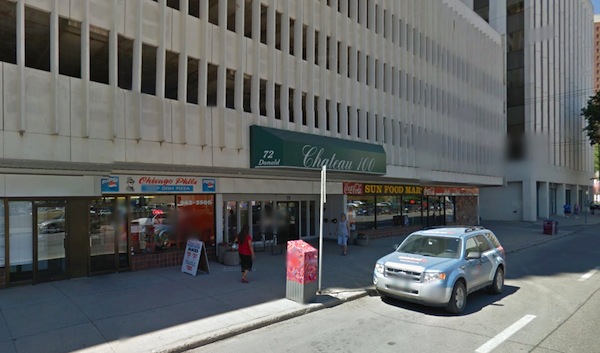 A woman was shot and killed at the Chateau 100 apartment block on Donald Street July 1, 2014. (GOOGLE STREET VIEW)

Winnipeg police have upgraded charges against a man in connection to a homicide on July 1.

Police originally said Michelle Stobbe, 28, was killed when a 9mm handgun accidentally fired while being handled by a 35-year-old man.

The shooting occurred at the Chateau 100 apartment block on Donald Street at around 3 a.m.

Police said Stobbe grabbed the arm of the man, forcing the gun to misfire, but further investigation has revealed that wasn’t the case.

John Elwood Cameron of Winnipeg has been charged with second-degree murder and remains in custody.

The two were involved romantically at the time, and police say it was domestic matter.