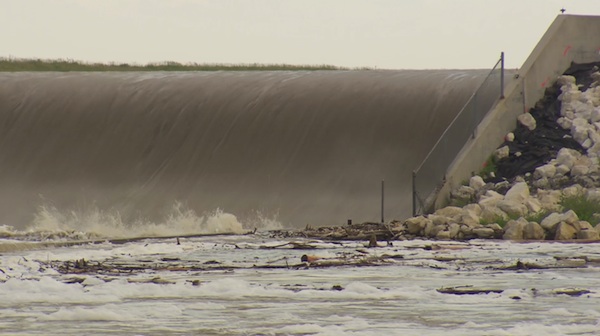 Water flows through the Portage Diversion on Saturday, July 5, 2014. (GOVERNMENT OF MANITOBA)

WINNIPEG — Manitoba flood forecasters say a significant crest of the Assiniboine River is expected for Portage la Prairie on Wednesday between 9 a.m. and noon.

Water levels in the area are continuing to rise, with flows predicted to reach 50,500 to 51,500 cubic feet per second (cfs) by the time the crest arrives.

The Portage Diversion will handle flows of approximately 34,000 cfs throughout today and Tuesday as the crest nears.

The province is asking sightseers to avoid areas along the Portage Diversion and the Assiniboine River dikes unless they are working or volunteering. Sightseers are making it difficult for crews and homeowners to move around the area and get necessary work done to raise dikes.

A potential cut at the Hoop and Holler Bend is still being considered depending on how high the Assiniboine River rises.

“If we can manage the current flows with the forecast we have, and if we’re able to get the flows through the Assiniboine and through the Portage Diversion, the scenario we’re looking at is it would probably not be in operation,” Emergency Measures Minister Steve Ashton said, noting the decision also depends on the weather.

While work continues to complete upgrades to dikes in affected rural municipalities, crews worked overnight to deliver an estimated 69,200 sandbags to the RM of Cartier. Another 60,000 sandbags will be delivered to the RM of St. François Xavier today as about 75 members of the Canadian Armed Forces assist with enhancing area dikes.