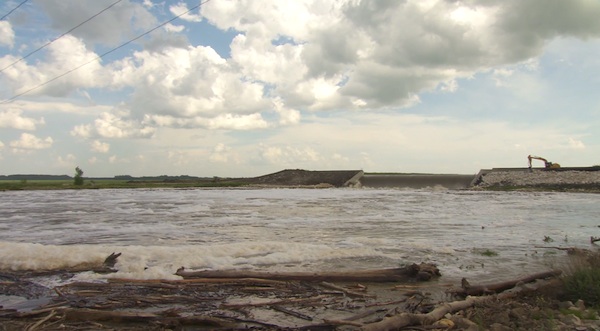 Water from the Assiniboine River flows through the Portage Diversion near Portage la Prairie. (GOVERNMENT OF MANITOBA)

The Assiniboine River is expected to rise in Winnipeg about one metre in the next three to four days, city officials warn.

However, residents won’t be requiring sandbags in order to protect their property.

The rise will occur from Route 90 westward within the next three to four days. The levels on the lower Assiniboine River and the Red River are predicted to rise 0.2 metres, similar to that of 2011.

Flood pumping stations have been activated and temporary pumps are deployed to dewater drainage pipes after a rainfall event.

The city says high river levels should be expected throughout the month of July, with a higher risk of basement flooding as a result. Homeowners are encouraged to install a backwater valve and sump pit drainage system, and check and maintain their equipment regularly.

Boat launches remain closed and boating on bodies of water in Winnipeg is not recommended at this time.