Svenne Named Top Chef at Inn at the Forks 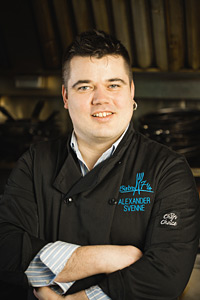 The Inn at the Forks has named Alex Svenne as their new executive chef.

Known as Chef Alex, Svenne will be responsible for all culinary operations, including banquet and catering facilities, room service and a new casual fine dining restaurant scheduled to open in early September.

Current Inn at the Forks executive chef Barry Saunders assumes the same role at the Canadian Museum for Human Rights. Saunders will also be opening a 70-seat destination bistro to be located within one of the museum’s massive stone roots.