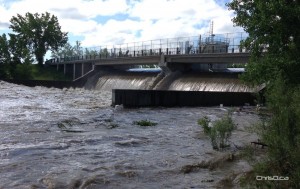 PORTAGE LA PRAIRIE, Man. — Premier Greg Selinger toured the banks of the Assiniboine River on Wednesday just as the crest was expected to hit.

Selinger spoke to reporters at Spillway Park near the Portage Diversion control structure, and said dikes along the river in the Portage area are holding as planned, but the crest has been pushed back to this evening.

“So far the dikes are looking pretty solid, but they’re being monitored 24/7,” Selinger said, adding they’re much higher and drier than in 2011.

Provincial staff are monitoring dikes during the day, while the military is using their advanced Aurora aircraft to make flyovers at night. The plane can detect any changes in water movement.

About 200 homes are considered at-risk to the rising river in the region, with another 150 considered vulnerable if the province choose to cut a dike at the Hoop and Holler Bend. Officials say such a breach of the dike will only be used as a last resort to ease river pressure.

Applications for disaster financial assistance are now being accepted through the province’s website.

Federal NDP leader Thomas Mulcair was scheduled to take a tour of the Manitoba flood zone, but was denied by the national defence minister’s office. Mulcair said he had been approved to go on a tour after making arrangements with provincial officials and the Canadian Armed Forces.