Home » News » You Can Sing on the Bus, But Don’t Disturb Anyone

You Can Sing on the Bus, But Don’t Disturb Anyone 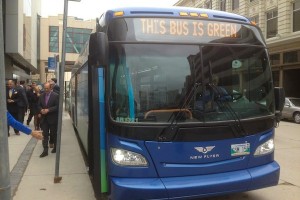 The city is changing its tune when it comes to allowing bus-riders to sing on public transit.

A new proposed bylaw forbidding one from singing came forward on Wednesday, sending citizens to quickly attack the city for over-policing something they didn’t think was a real concern.

The city says in a release that part of the bylaw will be amended to ensure clarity, specifically the playing of a musical instrument, singing, or staging a live musical performance on a bus.

“With some revised wording, we expect that the purpose of the proposed bylaw will be clearer that the intent is not to limit freedom of expression,” said Dave Wardrop, director of Winnipeg Transit.

“If a transit user is singing in a manner that is not disturbing fellow passengers or the transit operator, there is no issue,” Wardrop added.