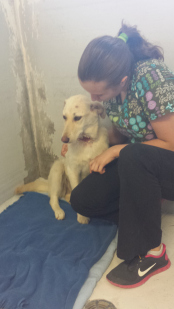 RCMP have launched an investigation after two dogs were injured in rural Manitoba.

A report of alleged animal abuse was made Thursday afternoon, sending police to find an approximately nine-month-old Labrador puppy roaming in the RM of Hanover, near Grunthal.

The dog’s throat was slashed, exposing her trachea. She had multiple engorged wood ticks.

After being treated by a Winnipeg animal hospital, the dog was turned over to D’Arcy’s ARC pet rescue.

Police are also investigating after a three-month-old Terrier cross was found with a broken hind leg near Mitchell, Manitoba. There is no direct link between the two cases, police say.