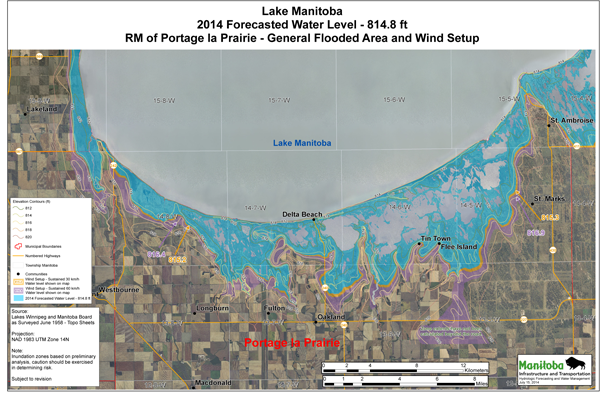 A map of potential flooding around the southern tip of Lake Manitoba. (PROVINCE OF MANITOBA/HANDOUT)

The Province of Manitoba says deliberately breaching the dikes around Hoop and Holler Bend in rural Manitoba won’t be necessary.

The flows along the Assiniboine River are declining and are expected to continue to slowly decline, said the Province on Thursday.

However, that doesn’t mean the province is out of the woods yet — the government released several maps showing the possible flood scenarios on Lake Manitoba, especially around the southern tip.

Lake Manitoba is expected to peak at 814.8 feet by early August. So far, 300 applications for disaster assistance from 270 people have been received by the government.