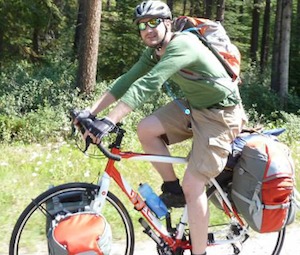 A kidney transplant recipient on a cross-country bike tour will make a stop in Winnipeg today.

Ron Hahn was the recipient of a kidney eight years ago from his father. To pay it forward, he is now cycling solo across Canada as part of the Spare Parts Tour to raise awareness and to dispel myths about organ and tissue donation.

Hahn will share his story in the Garden of Life in front of the Assiniboine Park Conservatory at 11 a.m. He will be joined by Dr. Faisal Siddiqui, organ donation physician of Transplant Manitoba’s Gift of Life program.

The 8,600 km tour will arrive in Thunder Bay next week before eventually ending up in St John’s, Newfoundland. The tour began in June, leaving from Tofino, BC.