Home » Columns » Summer of Tragedy in the West: Currie

Summer of Tragedy in the West: Currie 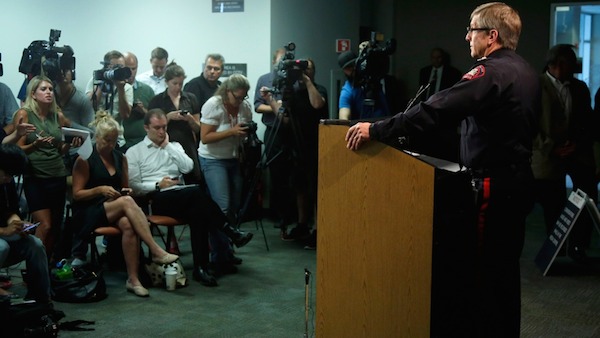 Calgary Police Chief Rick Hanson announced first and second degree murder charges are being filed in connection with the disappearance of Nathan O’Brien and his grandparents on July 14, 2014. (CP)

My strongest memories of early childhood go back to the year 1952. I celebrated my 5th birthday, and it was the last summer of total freedom before heading off to school. We roamed all over our neighbourhood in Winnipeg, until mom blew a whistle calling us in for meals.

Flash ahead to 1979. We were living in Regina, and I accompanied my 5 year old daughter Katie as she made her rounds on Halloween. Katie knew everyone on our street, far better than I did.

For some reason those memories flooded my mind as we followed the story of Nathan O’Brien in Calgary. Just before Canada Day, he went to Grandma and Grandpa’s house for a sleepover, and less than 24 hours later it appears that Nathan and both grandparents were murdered. As the story unfolds, it seems young Nathan may simply have been “in the wrong place, at the wrong time.”

A couple of times last week, police Chief Rick Hanson spoke to reporters wearing a stetson. It was Stampede week, when Calgary welcomes the world to its doorstep. On one level, the tragic story speaks volumes about how our society has changed.

In the early 1950’s and the late 70’s, we could not even imagine a world where scary stuff like internet stalking and cyberbullying would endanger our children. We can’t turn back the clock, but it seems to me there’s a lot more we can do to make our neighbourhoods safer.

A good start might be to spend more time shaking the hands of other folks on our block. Perhaps the sight of more people in their yards, visiting with each other would be just enough to make bad people think twice about doing anything so horrible.

The summer of 2014 will be forever remembered as the summer when everything changed for the O’Brien and Liknes families in Calgary. And what a horrible end for a 5 year old boy.