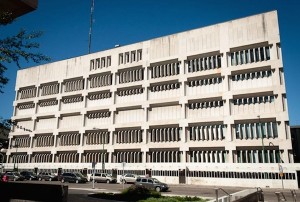 The Public Safety Building is an example of the style of architecture being used in the ‘Fidelio’ set. (MANITOBA OPERA / HANDOUT)

When the Manitoba Opera opens its new season this fall, it will have the first new production built by the company since 2007.

“Fidelio” will be directed by GM and CEO Larry Desrochers himself.

“Without giving too much away, I have very specific ideas about the world that Beethoven has created in the opera and how we can connect that world to the world we live in today,” Desrochers said.

Tasked with making this vision a reality is Manitoba Opera’s director of production, Sheldon Johnson who is designing the set and overseeing its construction.

“In the case of Fidelio, I looked for inspiration in Brutalist Architecture. Coincidentally, there are plenty of examples in Winnipeg within walking distance of my office in the Concert Hall of this architecture: the Royal Manitoba Theatre Centre, the Canadian Grain Commission Building, the Radisson Hotel, and the Public Safety Building, to name a few,” Johnson said.

Fidelio tells the story of the courageous Leonore who poses as a young man (Fidelio) in order to work in the prison where her husband (Florestan) is wrongly imprisoned for his political beliefs. The constructed set will feature very tall concrete walls with no visual means of escape, to emulate a prison.