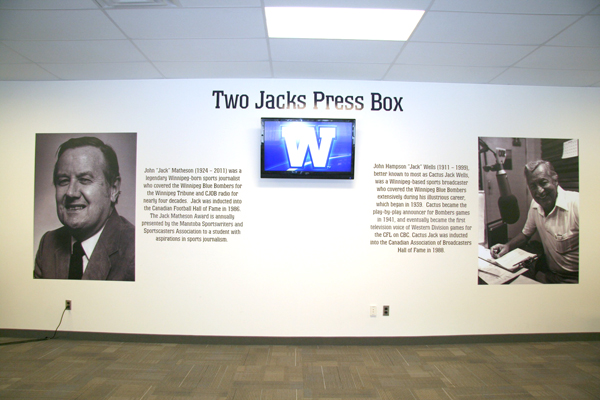 “We’re giving credit to two men who are extremely important to the Bombers for several decades,” said Blue Bombers President and CEO Wade Miller. “They were ultimate professionals, masters of their crafts, and the true gentlemen that they were.”

Members of both the Wells and Matheson families were on hand to honour the pair of late journalists.

“They would be very happy about this and our families are very happy about it,” said John Wells Jr. “I would say it is a very fitting tribute. When you look back at the long history of the football club, Matheson and Wells being so associated with the Blue Bombers through all those years I think it’s very fitting and it’s a wonderful place to be and see the boys on the wall.”

‘Cactus’ Jack Wells was a Winnipeg-based sports broadcaster who covered the Winnipeg Blue Bombers extensively during his illustrious Hall of Fame career. He became the play-by-play announcer for Bombers games in 1941 and eventually became the first television voice of Western Division games for the CFL on CBC. He was inducted into the Canadian Association of Broadcasters Hall of Fame in 1988.

John “Jack” Matheson was a legendary Winnipeg-born sports journalist who covered the Blue Bombers for the Winnipeg Tribune and CJOB radio for nearly four decades. Jack was inducted into the Canadian Football Hall of Fame in 1986.