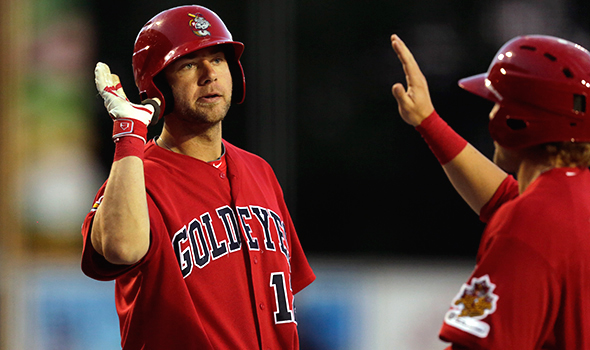 WINNIPEG — The mid-summer classic is coming to Shaw Park as the Winnipeg Goldeyes host two days of American Association All-Star Game festivities on Monday and Tuesday, and fans of the local ball club will be happy to see so many familiar faces among the All-Stars.

Six Fish were selected to Team North, including the league-leader in batting, Casey Haerther, who starts at first base. Veteran backstop Luis Alen will start at catcher, while Tyler Kuhn and Donnie Webb were selected as the starting shortstop and right fielder.

Closer Chris Kissock was the only Goldeyes pitcher selected to the team, while Ryan Pineda was chosen as the North’s utility player.

The All-Star Game itself event goes Tuesday night at 7 p.m., but there are plenty of celebratory events for fans to enjoy before the big game. Things get underway Monday afternoon with the FanFest on the Shaw Promenade from 3-6 p.m. Doors to the park open at 5 p.m. where they can take in an autograph session from 5:30-6 p.m., and the media skills “competition” is at 6 p.m.

The pros get their All-Star Skills Competition underway at 6:45 p.m. on Monday, which consists of Fastest Runner, Outfield Throwing Accuracy, and the Home Run Derby. Monday night concludes with a concert in the Recycle Everwhere Picnic Park from 8:30-9:30 p.m.

Tuesday is just as action-packed with the McDonald’s All-Star Skills Camp for kids from noon to 3 p.m. while the All-Star Luncheon at the Fairmont Winnipeg begins at noon. Fans can take in batting practice for Team North and Team South beginning at 4:15 p.m. before the All-Star Game begins at 7 p.m.

There is also a post-game party at The Met on Tuesday night.

This is the first AA All-Star game since 2010, and with the Winnipeg Goldeyes being named the American Association Organization of the Year following every single season since joining the league in 2011, the choice was easy. Winnipeg did host All-Star Games in 2001 and 2008 when a member of the former Northern League.

The Goldeyes remain atop the AA North Division with a 43-25 record.