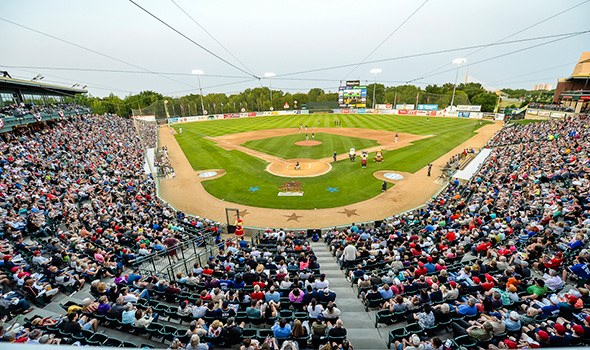 “It’s great for the Goldeyes. Great for the ballpark. And great for the City of Winnipeg,” said Goldeyes general manager Andrew Collier. “To be able to host everyone from across the league and show them what Winnipeg is all about.”

Shortstop Devin Goodwin was selected as the game’s Most Valuable Player, doubling to right in his first at-bat, and then going yard over the right field fence to give Team South a 1-0 lead in the fourth.

“It’s a great honour and I’m very thankful,” said Goodwin, doused in baby powder and shaving cream from his post-game celebration with teammates. “But the experience is really what’s really special.”

“It’s great for this city, to let everybody see the best players from around the league,” added Goodwin. “Myself, I’ve never been to Winnipeg. It was great being here and seeing (Shaw Park)… I think it’s big for the league.”

“I loved it. The fans obviously know what’s going on. You know, it’s not all hockey up here. They obviously love their baseball too.”

Holding a 2-0 lead through eight on solo-homers from Goodwin and Kansas City T-Bones designated hitter David Espinosa, Team South beat up on Winnipeg closer Chris Kissock and St. Paul’s Dan Sattler in a five-run ninth to make the 7-0 final.

Goldeyes first baseman Casey Haerther leads the AA in batting average by a mile, and walked to the plate in the bottom of the ninth hoping to give his hometown fans something special to remember from one of the six Goldeyes in the Team North lineup.

“The whole night was fun. The crowd was behind us the whole time,” said Haerther when asked about his ninth-inning at-bat. “Obviously you want to get on the board right there. (Matt) Nevarez is a pretty good pitcher. He has a lot of saves for (the Wichita Wingnuts). He threw a good slider and struck me out, but I know they’ll be here in a couple weeks and I’ll get him then when it matters.”