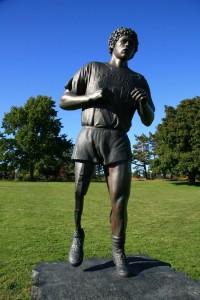 The Terry Fox statue is seen in Victoria, BC in this file photo (SAM DCRUZ / SHUTTERSTOCK.COM)

Manitoba is renaming its civic holiday in August after a Winnipeg-born hero.

“Terry Fox embodied hope, courage, commitment and strength in the face of adversity,” Selinger said. “Naming the civic holiday after him is a way for all Manitobans to honour this great Canadian for the hero he was.”

Selinger hopes the rest of the country will follow suit in adopting the name.

Fox raised millions of dollars for cancer research by attempting to run across Canada on one leg during his Marathon of Hope. He died in 1981.

Today, the Terry Fox Run is held in over 60 countries and has raised over $600 million, making it the world’s largest one-day fundraiser for cancer research.