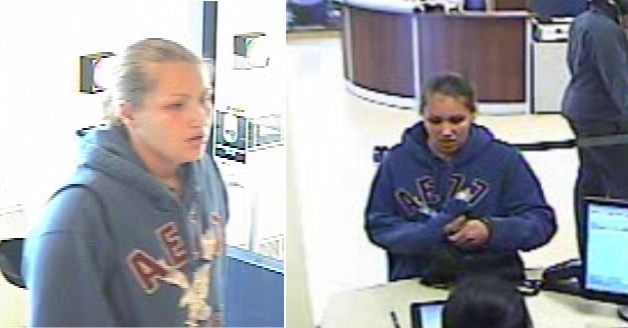 Winnipeg police are looking for this woman after a bank robbery in the 500 block of Main Street on Thursday, July 31, 2014. (WPS HANDOUT)

Winnipeg police are hoping surveillance images from a bank robbery on Thursday will lead to the arrest of a suspect.

Police were called to the Royal Bank in the 500 block of Main Street just after 3 p.m. when a woman approached the 28-year-old female teller demanding cash. The suspect said she had a gun and made off with an undisclosed amount of cash. A gun wasn’t seen and the suspect fled the area.

The woman is described as aboriginal in appearance, approximately 20-25 years of age, 5’4” to 5’5” tall, with a medium build and light brown hair. She was wearing a blue hoody, black pants and sandals.

UPDATE: Sunday, August 3 — Police have arrested Destinee Stranger, 26, of Winnipeg and charged her with armed robbery using a weapon. She remains in custody.