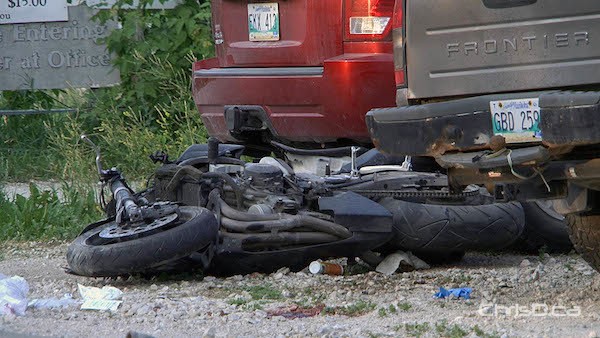 One person was killed and another injured after a motorcycle crash in the RM of St. Andrews on Sunday, August 3, 2014. (SHAUN McLEOD / FOR CHRISD.CA)

A 20-year-old Winnipeg woman was killed Sunday evening while riding as the passenger on a motorcycle in the RM of St. Andrews.

RCMP responded to the crash just before 7 p.m., where they say the motorcycle — being driven by a 26-year-old Winnipeg man — collided with a parked vehicle while rounding a corner. The collision happened at Lyall Drive and River Road.

The driver was taken to hospital with non-life threatening injuries. The woman succumbed to her injuries.

Police say a helmet was found at the scene, but it’s not clear who was wearing it.

Speed is considered a factor in the collision and alcohol doesn’t appear to be involved.

The name of the deceased isn’t being released.