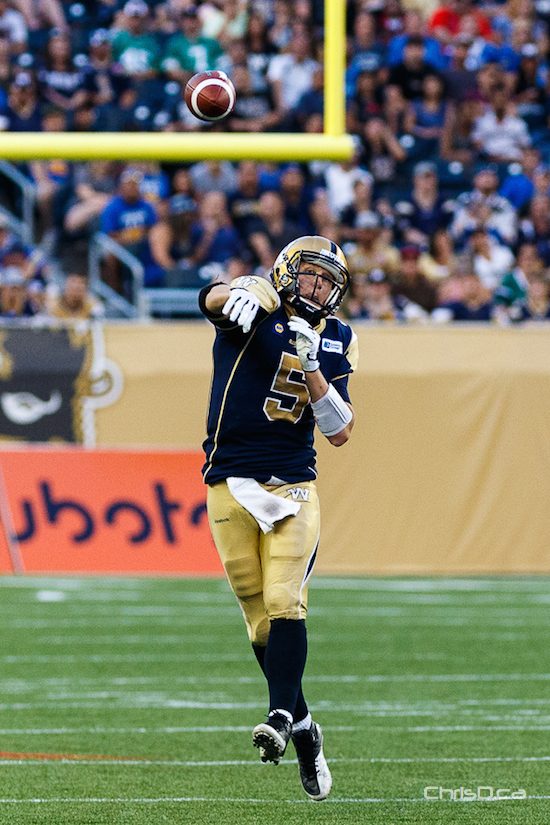 Three down football is better than ever in western Canada, but the east is struggling to say the least. Thursday evening at a very noisy Investors Group Field in Winnipeg, Drew Willy and the Winnipeg Blue Bombers failed to come up with another miracle as the defending Grey Cup champion Roughriders prevailed 23-17.

The Bombers are five and two under their new head coach Mike O’Shea, and the Drew Willy storyline is a great one. Last year he earned a Grey Cup ring as Darian Durant’s backup in Regina. This year he is showing the poise of a polished veteran as he helps to restore the faith of Blue Bomber fans. It was a tall order. The pride of Manitoba were dreadful in 2013, finishing with a record of three and 15. It was painful to watch for boomers like me who grew up watching another great coach named Bud Grant win multiple championships.

Could Drew Willy be the second coming of Kenny Ploen? There are some similarities, and old #11 himself is among those who are hugely impressed.

Most of you will know that I have been a Roughrider fan for many years. It is in my blood because dear old dad played for the Riders in the leather helmet era, before moving to Winnipeg and playing for the team that would become known as the Blue Bombers. Winnipeg has once again been my home since 2012, and the home team has proven this year that they definitely deserve to be supported.

It did seem fairly weird cheering for the other team in a game involving the green and white. My Rider pride will definitely be there when they’re playing teams other than Winnipeg. Next up for the Bombers are the Toronto Argonauts, the only eastern team to win more than one game this year. The crowd at Rogers Centre on Tuesday will be half the size of the one in Winnipeg, and that’s not about to change.