Home » Entertainment » CONTEST: Win Passes to ‘Sin City: A Dame to Kill For’

CONTEST: Win Passes to ‘Sin City: A Dame to Kill For’ 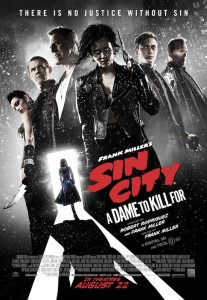 ChrisD.ca and eOne Films want to send you to an advance screening of “Sin City: A Dame to Kill For.”

Synopsis: Co-directors Robert Rodriguez and Frank Miller reunite to bring Miller’s visually stunning “Sin City” graphic novels back to the screen in “Sin City: A Dame to Kill For.” Weaving together two of Miller’s classic stories with new tales, the town’s most hard boiled citizens cross paths with some of its more reviled inhabitants. Sin City: A Dame to Kill For is the follow up to Rodriguez and Miller’s 2005 ground-breaking film, “Frank Miller’s Sin City.”

We have ten (10) double passes up for grabs.

Simply fill out the form below and we’ll draw 10 random winners. Good luck!

Never miss another contest! Be alerted when we have a new promotion. Sign up for our contest alerts e-mail list.

No purchase necessary. One entry per person, please. Multiple entries will not be counted. All personal information is handled in accordance to our Privacy Policy. Contest closes Tuesday, August 19, 2014 at 5 p.m. CT. Open to all Manitoba residents. Winners will be notified by e-mail.