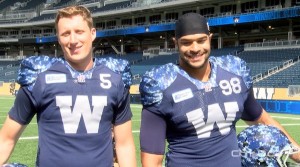 The jerseys are mostly blue and incorporate a camouflage-like pattern, similar to the team’s helmets revealed during practice on Monday.

Reaction on social media was quick to point out the lack of gold in the uniforms.

“It’s just one game, so obviously we’ll always be blue and gold, but it’s definitely something cool for the players and fans that love the CFL,” said Blue Bombers quarterback Drew Willy.

The Bombers will wear their new Reebook gear on Friday when they host the Montreal Alouettes at Investors Group Field.

“I think all the guys are really into it (the uniforms),” said Blue Bombers defensive end Jason Vega. “I think that’s attributed to the fact that it’s maybe geared toward a younger generation in a sense. And that’s why the retro… kind of goes well with the older folks.”

Fans can purchase their own signature jersey at the Bomber Store.