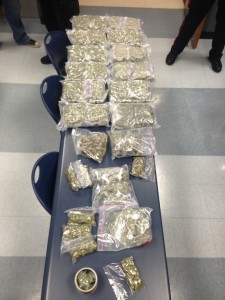 A 50-year-old man is facing drug charges after Winnipeg police raided a suite in the 400 block of Sargent Avenue.

The tactical support team executed a search warrant on the home on Tuesday, seizing more than 6.7 kg of marijuana estimated at $67,000. Police also found approximately $72,000 in Canadian.

One man was taken into custody at the scene and has been charged with possession of a scheduled substance for the purpose of trafficking, and possession of proceeds of property obtained by crime.

← Previous: Moist to Play the Burt in November Next: Drop Zone Rappellers Dropping It All for Charity →
Tags: Drugs | Marijuana | Winnipeg Police