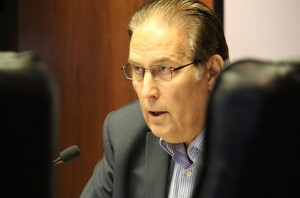 WINNIPEG — The newest candidate in the race for mayor is appalled he and two other candidates have been excluded from an upcoming mayoral forum.

David Sanders says he is surprised the Downtown Winnipeg BIZ excluded him, Mike Vogiatzakis and Michel Fillion from participating on September 10

“There are at least another dozen all-candidate mayoral debates and forums scheduled by other organization (sic). I have been invited to all of them, and I have agreed to participate in all of them,” Sanders said.

“I believe it was wrong for the BIZ to decide to exclude any of the registered mayoral candidates, and unless the BIZ reconsiders its position and invites all eight to participate, I will not participate.”

“For the forum we have planned, there is a limited timeframe for discussion on issues related to our city’s downtown,” said Downtown BIZ managing director Jason Syvixay. “This means we’ve kept the forum focused on a smaller group of candidates. Regardless, we welcome all candidates to share their message with the public about their ideas for downtown.”

Syvixay added there will be other opportunities for all candidates to share their ideas, with such initiatives like BOLD Winnipeg and the WinnipegREALTORS forum.

The forum will be held from 5-7:30 p.m. in the gallery of the Manitoba Hydro Building and be moderated by Richard Cloutier and Shannon Sampert.