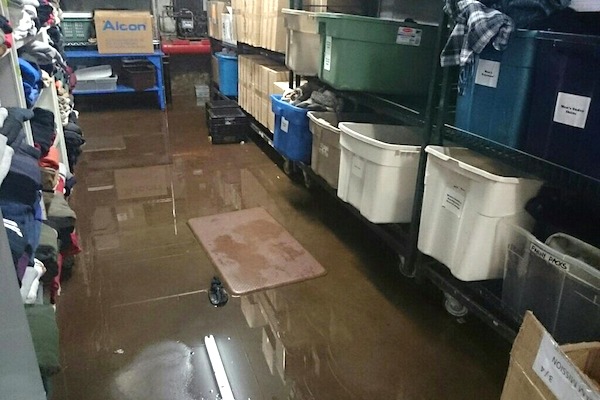 Heavy rainfall left a soggy mess in the basement of Siloam Mission on Thursday, August 21, 2014. (TWITTER)

For the second time in eight months, Siloam Mission’s basement has taken on water.

Following Thursday night’s torrential downpour, the Winnipeg homeless shelter says it received 26 inches of rain in its basement. Damage to mechanical systems in the boiler room was reported, while some food and clothing supplies were also lost, including winter wear.

“Storm drains were overwhelmed and water backed up into the basement,” said Dan Maxson, director of operations for Siloam Mission. “We are already preparing for winter so we need to get this cleaned up quickly.”

It’s the second time Siloam Mission has had to deal with flooding in the last year. Just before Christmas, frozen pipes caused significant flood damage to the basement.

“This storm hit our city hard and many people are waking up today to terrible damage. Our thoughts are with our neighbours and community.”

The shelter’s basement reopened in June after repairs were made.