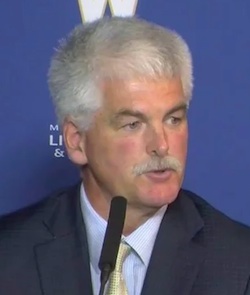 The Winnipeg Blue Bombers say corporate restructuring is behind the dismissal of vice-president and COO Jim Bell.

“On behalf of the entire organization, I would like to thank Jim for his dedication, work ethic, professionalism, and most importantly, his passion for this football club over the past decade-plus,” said Bombers president and CEO Wade Miller. “Jim took on many roles and responsibilities throughout his time with the football club, and always did it with extraordinary effort.”

Bell’s last day with the Bombers will be Friday, August 29.

“He is truly one of the good people in this world, we sincerely thank him for his years of service to this club, and we wish him all the best in his future endeavours,” Miller added.

Bell was most visible to the public during the inaugural CFL season at Investors Group Field in 2013, when the Blue Bombers were working out traffic kinks.

His position will not be refilled.