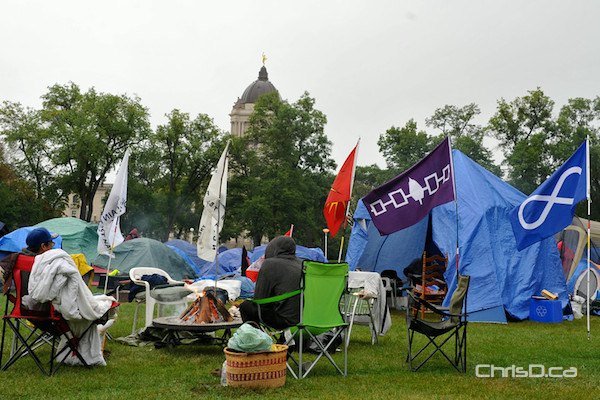 Protesters against the federal government’s decision to reject a national inquiry into missing and murdered aboriginal women camp out in Memorial Park in downtown Winnipeg. A sacred fire was lit Sunday and is scheduled to burn for four days. (TED GRANT / CHRISD.CA)

The movement for a national inquiry into missing and murdered aboriginal women has received the voice of Manitoba Liberal leader Rana Bokhari.

“Once again the Conservatives have shown an absolute disregard for the lives of these victims,” Bokhari said of Prime Minister Stephen Harper’s reluctance to call an inquiry. “These are crimes, but there are other issues that we need to address. Why are these women targeted? What has put them in these vulnerable positions? How can this national crisis be stopped? These questions need to be answered.”

The renewed calls come after the body of missing 15-year-old Tina Fontaine was pulled from the Red River on August 17. Her death is being investigated as a homicide and no arrests have been made.

Since 1980, 1,200 aboriginal women have gone missing or been murdered in Canada.