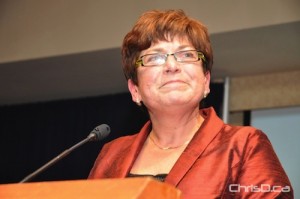 TORONTO, AUGUST 28, 2014 — In a random sampling of public opinion taken by the Forum Poll on behalf of ChrisD.ca, a Winnipeg news and media provider, among 606 Winnipeg voters, the plurality of those with a choice, about one fifth, will vote for former MP Judy Wasylycia-Leis (21%), while just more than one tenth will vote for either of the two other main contenders, Gord Steeves (12%) or Brian Bowman (13%). Few will vote for Robert Falcon Ouellette (6%) or Paula Havixbeck (2%) or any other candidate (89%). The largest single group of voters are undecided (39%). Wasylycia-Leis’ vote is common to the oldest (30%) and to provincial Liberals (27%) and NDP voters (32%). Both Steeves (24%) and Bowman (20%) are popular with provincial Progressive Conservatives, while Bowman has appeal to Liberals as well (24%).

All candidates listed are relatively equally likely to be selected as second choice, including Havixbeck and Falcon Ouellette (14% each) and Bowman and Wasylycia-Leis (13%) each) and Gord Steeves (11%).

Accountability in leadership and infrastructure renewal are equally likely, by about a quarter each, to be seen as the most important issues in the election (27% each), while crime (10%) and taxation (11%) are seen to be important by about half as many. Homelessness (7%), downtown revitalization (7%) and insect control (4%) do not garner the same level of attention.

“In municipal politics especially, name recognition is everything, which is why incumbency matters so much. Judy’s been a good federal foot soldier in Winnipeg for years, and she’s well known for it, so there’s no surprise in her leading the race at this point”, said Dr. Lorne Bozinoff PhD, founder and president of Forum Research.

This poll was conducted August 27 among a randomly selected sample of 606 Winnipeg voters. The Poll was conducted by Interactive Voice Response (IVR) and has a margin of error of plus or minus 4%, 19 out of 20 times.

Winnipeggers go to the polls on October 22.