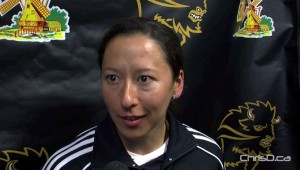 The teams played on the U of M turf fields before the Herd begins their regular season next weekend.

The Bisons pushed the play from the opening kickoff, owning the time of possession early on. Several chances were thwarted by Crookston keeper Lexie Gauger, but the Bisons would open the scoring at the 24-minute mark. Brazilian recruit Bruna
Mavignier converted a pass from Alyssa Robinson from just inside the top of the penalty area to put the Bisons up 1-0.

Chances were had by both teams before the end of the half. Bisons defenders Emma
MacLennan, Sara MacLennan, and Elyse Molyneaux thwarted several Crookston
opportunities while Crookston’s Maggie Gibbons, Delaney Kohorst, and Samantha
Deutsch kept the Bisons forwards from adding to their lead.

“We played well,” Bisons head coach Vanessa Martinez Lagunas said. “We have some stuff to work on for next week, but this was a good start for us. We
have confidence going into next week.”

The Bisons host the Regina Cougars on Friday, September 5 at 6 p.m. The Saskatchewan Huskies will visit the following night at 6 p.m.