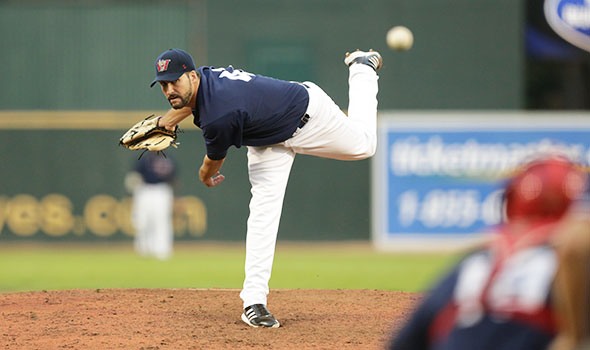 Winnipeg Goldeyes pitcher Nick Hernandez has been named the American Association’s 2014 pitcher of the year.

The 26-year-old leftie went 12-2 with a 3.11 ERA in 19 starts with the Goldeyes this season. He posted a pair of complete-game shutouts, which were the first two of his career. He was especially good on the road, going a perfect 7-0 with a 2.44 ERA in 11 starts. He’s the first Goldeyes pitcher to win 12 games in a season since Ace Walker did in 2009.

Hernandez joins Walker and Rafael Gross as Goldeyes pitchers to have won league pitcher of the year awards.

The league also announced Monday that Winnipeg Goldeyes infielders Casey Haerther and Tyler Kuhn have been selected as 2014 post-season all-stars.

The Goldeyes play their final 2014 regular season game tonight against the Gary SouthShore RailCats at 7 p.m at Shaw Park.