Home » News » Steeves Targets Wasylycia-Leis as Being Cozy with NDP

Steeves Targets Wasylycia-Leis as Being Cozy with NDP 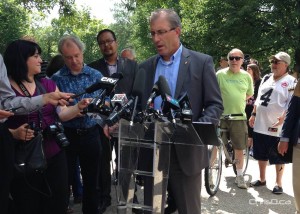 Mayoral hopeful Gord Steeves continued his attack Wednesday on frontrunner Judy Wasylycia-Leis, associating the former NDP MP as being a repeat of the provincial government’s policies.

Standing in front of the Manitoba legislature, Steeves said the Moody’s Investors Service downgrade of the City of Winnipeg’s debt rating outlook shows how Winnipeg would be worse off with Wasylycia-Leis as mayor

“The NDP’s record on taxing Manitobans is not defensible, and if Judy Wasylycia-Leis is elected mayor, you can be assured Winnipeggers will feel that tax pain once again,” Steeves said. “These tax increases will make it nearly impossible for Winnipeg to thrive. It needs to be stopped.”

Steeves also accused Wasylycia-Leis’ senior policy analyst, Peter Dalla-Vicenza, as taking a leave from his job in Premier Greg Selinger’s office to work with the candidate.

“In other words, Selinger and Wasylycia-Leis are sharing the same staff,” Steeves said.