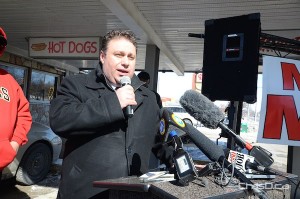 The funeral director and businessman on Friday said he would much rather see city crews remove piles of snow once they reach 15 cm in height, as opposed to letting snow pile up to create windrows.

Vogiatzakis said crews would plow snow into one lane on major routes to allow easier collection and transport into waiting trucks. The pro-active approach in removing snow quickly off streets and boulevards would prevent ruts from forming and improve safety, he said.

Vogiatzakis compared his plan to that of Montreal, who says is currently more efficient at clearing snow than the City of Winnipeg.