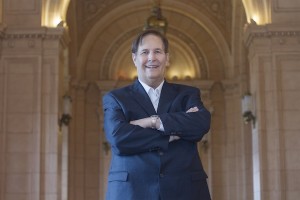 Winnipeg mayoral hopeful David Sanders outlined his plans for improving how traffic issues are handled in the city on Tuesday.

Speaking at the University of Manitoba, Sanders said he would improve safety and fairness for all motorists, cyclists and pedestrians travelling on Winnipeg streets if elected.

Sanders said he would direct the public works department to respond to advocacy group Wise Up Winnipeg and the evidence they have gathered demonstrating the so-called shortcomings of the city’s traffic management practices, such as speed limits, speed ­reduction signage, and amber light timing.

He said traffic enforcement isn’t simply about collecting revenue for the city and province, but to encourage motorists to drive safely.

Sanders added he’s against the idea of the Winnipeg Police Service having to fill a ticket quota to finance its operations.