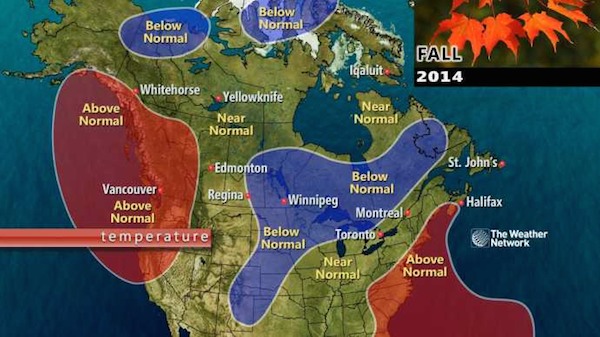 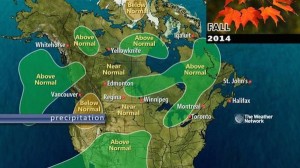 Precipitation amounts for the country this fall. (THEWEATHERNETWORK.COM)

WINNIPEG — After an abbreviated summer season, fall seems to be well on its way on the prairies, signalling the start of cooler temperatures with each passing day.

The Weather Network has come out with its fall outlook, predicting Manitoba will see below normal temperatures forecast in central and southern areas with near normal values in the north.

“Fall is the season where we usually see the most dramatic temperature and precipitation changes from month to month as we transition towards winter,” said Chris Scott, chief meteorologist at The Weather Network. “We’re already seeing that extreme seesaw of temperatures starting to affect southern parts of the country; the wild fall temperature ride is off to an early start.”

September through November, the province is expected to see below normal temperatures, with Winnipeg in the near normal precipitation category.

Looking further ahead to the winter season, meteorologists are monitoring El Niño conditions in the Pacific Ocean. Favouring a weak system, the odds are for winter temperatures to be on the lower side of normal from Manitoba east to Quebec, with British Columbia seeing above normal temperatures.

“History tells us that a weak El Niño centred more across the central Pacific can produce colder than normal winters across central and eastern Canada. The possible weak El Niño developing for this winter is one of the key factors our forecast team is monitoring.”

TWN will release its complete winter outlook in late November.