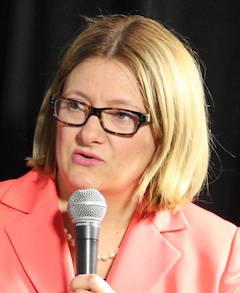 Mayoral candidate Paula Havixbeck believes mobile photo radar is nothing but a cash grab and does little to improve safety on the roads.

The Charleswood — Tuxedo councillor on Tuesday said, if elected, she would work with Winnipeg police, the police board and Manitoba Public Insurance to come up with better solutions, such as involving more traffic-enforcement officers and/or using stationary cameras.

“These vehicles are frequently improperly parked and it doesn’t appear to be about safety anymore when MPI reports show fatalities due to speeding are going down,” Havixbeck said.

Havixbeck said she would like to see police set up random check points to catch speeders, resulting in demerits and ensuring streets are safe.