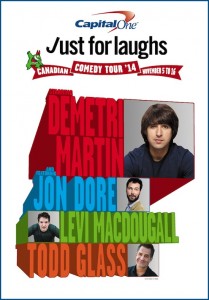 The 2014 Capital One Just For Laughs Comedy Tour is returning to Winnipeg this fall, bringing with it four comedians for the tour’s biggest event yet.

The tour will play the Centennial Concert Hall on Wednesday, November 5.